Whether you’re thinking of replacing your old screwdriver or looking for the easiest way to screw into plasterboard or drywall, we will have a look at several aspects to take into consideration before buying a Collated Screw Gun, also known as Drywall Screw Drivers. 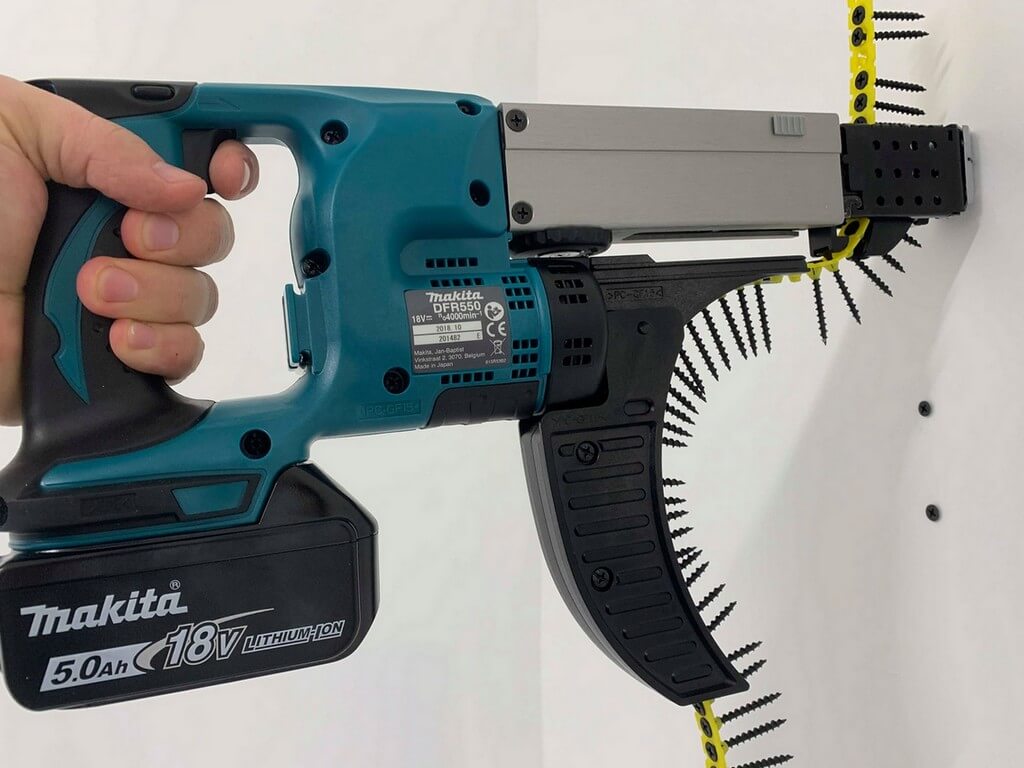 Similarly, to any other screwdriver you’ve got elements of power, capacity and battery life to consider, however you would also need to reflect on its suitability for the job!

Are you going to use on a daily basis? Or maybe just occasionally? Would you like to use it on other material as well, or just strictly drywall? Based on this, you could then take a decision and move forward into looking at your options.

Beside the usual power/capacity you would also need to consider that Collated Screw Guns come in different sizes and can only be used with collated screws of certain sizes.

For example, if you’re planning on dry lining a 10ft sq room including walls & ceiling, you would require around 2000 screws! However, since double-sheeting walls is quite a popular choice due to their insulation benefits, the most common screws to use in this case would be the 45-55mm for double sheeting, and 32-38mm for the first layer of sheets.

Based on this, you would be looking at Drywall Screwdrivers which increased capacity to accommodate these longer screws. Luckily some of the newer models benefit from an adjustable stopper base specially designed for using screws of different lengths. On top of that, the Screw Guide keeps the screw strips in place for maximum manoeuvrability during operation.

As is the case with the majority of power tools, Auto-Feed Screwdrivers come in either Corded (mains powered) or Cordless (battery operated). Read our blog on Cordless and Corded Power tools for more info on the subject!

Looking at the advantages of maintaining constant power during operation, you would also need to consider the reliance on a power supply and the cord itself, which doesn’t allow for the same mobility as cordless drywall screwdrivers.

With the advantage of cordless power, these screw guns empowers the user with maximum flexibility, however you would need to think about having the batteries charged before use. On this subject, when choosing the battery certain elements will need to be taken into consideration, such as the Voltage and Charge!

Why not have a look at our whole range!

As is the case with both cordless and corded screwdrivers, the higher the power the easier the screw insertion will be, with the majority returning a rotational speed of around 4000rpm- 4400rpm. In the case of cordless screw guns, most of them come with either 14v or 18v motors, while the corded ones come in either 110v or 240v with a power range of around 400–700W.

Some things to consider before deciding on either Corded or Cordless

If you are opting for the 110v you would also require a power transformer, since the 110v are usually designed for work sites and are not compatible with 240v domestic plug sockets

With so many makes and models, the majority of Li-Ion Batteries used for Collated Screw Guns come in either 14v - 18v – 20v of different electric amperage. As mentioned above, the higher the voltage the more power the screwdriver returns, while the amp-hour is the amount of energy the battery can hold.